History of the Owl 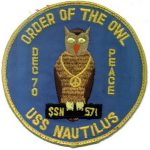 The Owl first surfaced years ago aboard the USS Nautilus. Being a crew member at that time, myself, Jiggs Kronenwetter, Jerry Forseth, and Phil Zahl had been to the Newport Jazz Festival the night before we were to leave on a patrol. Phil had the idea that we take this statue of an owl along with us then return it when we got back. (This is a common thing for submariners. They always take everything not nailed down with them on patrols. The torpedomen took the Navy diver’s mermaid. Big Mistake!) So we took the Owl. That is another story.

Pictured right is the Owl in the Crew’s Mess on board the USS Nautilus as we were steaming in from patrol. In the front row are me, the Owl, and Jiggs Kronenwetter. Identifiable in the background are Ted Trafka (left), Frank Webb (reading) and Bob Holst (looking at the Owl). The others are obscured. The Owl, me and Jiggs, and everyone else in the picture, are sporting our beards. The Owl spent most of the patrol in the Maneuvering Room (after a short abduction by the Enginemen). The owl was there for all of the Maneuvering Room watches.

The Owl went ashore, as shown, to his perch in New London. He missed the next trip to Bermuda but he would soon return to the Big “N”.

It was on the 1966 Bermuda trip that we got involved in a life changing event for most of us. During a “war game”, the Nautilus was run over by the aircraft carrier USS Essex. It was not fun! The Owl cartoon was born. His first appearance as a cartoon was taking booze intravenously after the collision. After we limped back to New London, we reacquired the owl and returned him to his spot in Maneuvering. He was a veteran of a patrol and a shipmate. Needless to say, the Owl was the mascot of the electricians.

After that, cartoon Owl’s showed up inside of machinery that was disassemble for repair so that the only way to see the cartoon was to disassemble the machine. The Owl literally showed up everywhere on the boat. 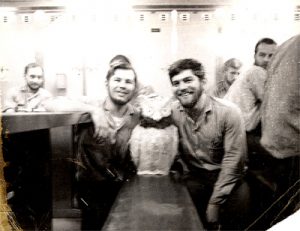 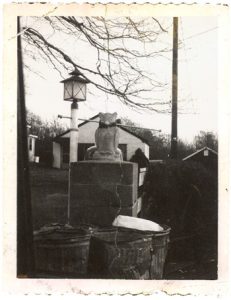 Pictured right, on watch in the Maneuvering Room (on the Nautilus), are (back row) Me, the Owl, Mr. Boyce, (front row) Ted Trafka and an electrician whose name I cannot remember. We were steaming in the Caribbean Sea at this time.

When I departed the Big “N” at the end of May, 1969, the Owl was resting comfortably in his watch standing space aboard. I was even given a citation upon my departure from the Navy for creating the cartoon character of the Owl. I don’t know what happened to the physical Owl after that, nor do any of my shipmates. I am sure he is somewhere contributing to the morale of those around him.

I went off to college and got a bachelor’s degree in art, and a master’s degree in Educational Media. My friends and I have had a lot of fun, over the years, with the Owl. Due to my cartooning and interest in graphic art, I have managed to feed myself many years doing visual communication. At this stage of my life, I am focusing on cartooning, hoping to do nothing but draw cartoons soon. By the way, there are many owl characters (see owl photos) from over the years that I am making web friendly. So keep checking for more historical Owls. 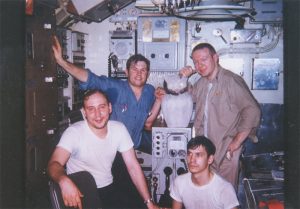 Jiggs Kronenwetter, the Owl, Jerry Forseth (the Great White Whale), and Jim Neaves (me) at the 50th Anniversary of the commissioning of the USS Nautilus SSN-571. The Owl was not really there, but his spirit was!

Everybody that ever served on the Big”N” was invited. 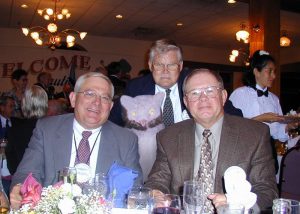 “How may of you mid-60’s and early 70’s Nautilus sailors remember the saga of the Owl? As I recall the Owl made at least one northern run. John Dudas designed this patch in 1970 (my error). If enough interest is generated we might be able to talk our storekeeper Gary Daines into getting a few made for purchase. If interested, Gary’s contact info is on page 2 – Either phone or drop him an email.”

This email from John Dudas ’69 – ’72 is in response to the article and provides some later history;

Just read the Nautilus newsletter [2007] and the article on the OWL Patch. I have to set the record straight. I did not design the owl patch.

I made the proclamation that every crewmember signed to refute the orders given to the Engineer to get rid of the Owl when he was hit as gear adrift by the ORSE Team. What was funny was when I even convinced the captain to sign it and promised the owl would take a trip foreword during any of the following ORSE inspections. The last person to sign it was the Engineer (Mr. Fast). When he saw the captains signature, he was beside himself because the captain ordered him to get rid of it. He calmed down when I explained the future travel plans for the Owl during any future ORSE Inspections.

After the Proclamation was completely signed, I got the idea that something additional had to be done to ensure the Owls legacy would live on – that’s where the idea for the patch came from. We had a competition to design the patch. If my memory serves me, the winning design was from an I&C tech – name escapes me and I’m not completely sure if that is correct, but I did not design the patch.

The only thing I did with the Owl was to make the Peace sign that is hanging around his neck. I made it from a steam trap gasket and some sink stopper beaded chain. It was to establish that the battle to get rid of the Owl from the boat had finally come to an end “PEACE DEC 70” was the day when he was finally safe onboard.

The first time he was removed from the boat is history – the collision with the Essex – we sure did not want any bad Ju Ju with that kind of past experience.

Hope this helps clarify a bit of history and stories that get twisted over time. You might want to pass this on to the Historian – whoever that is?

I still wonder where the Owl went – I toured Nautilus during conversion at Mare Island Shipyard and the yard personnel told me everything was removed and locked up to prevent collectors from taking parts off the boat.